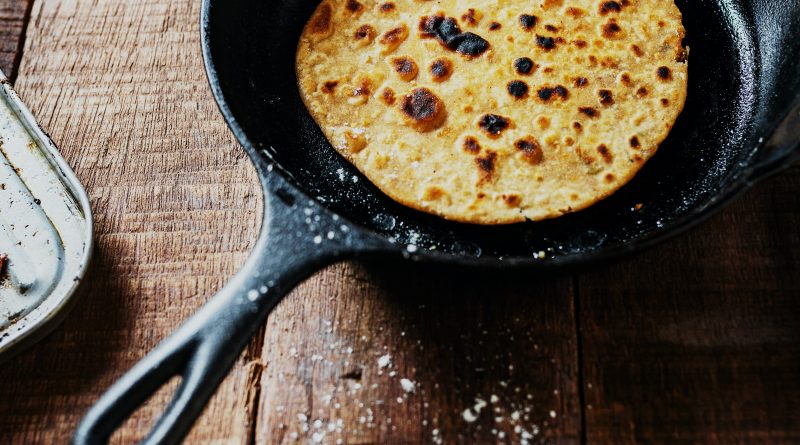 I’ve always been curious to know if cast iron pans warranted the accolades that are reigned down on them by over-zealous armchair chefs. Everywhere you look online you see people professing that cast iron cookware creates a superior heat source, makes food taste better and is a healthier way of cooking.

On the flip side, cast iron is also known to be notoriously difficult to take care of, and their use is often guarded by their owners. As one friend of mine told me, “I put orange traffic cones around mine so that nobody else can use them.” Horror stories abound that tell in graphic detail how well-meaning family members committed the ultimate sin of washing the cast iron skillets with soap, removing all the pan’s seasoning and flavor.

Over the holidays I decided it was finally time to buy one for myself and find out for myself if cast iron was worth the investment.

I found myself shopping at Bed, Bath and Beyond for a steel colander and decided on a whim to take a look at their selection of cast iron skillets. They carry their own brand of cast iron cookware called “Our Table”. On display were an 8″ pan, 10″ pan and 12″ pan. I decided to start with the 12″ version.

I had never used cast iron before, so I didn’t realize how heavy they were, and the 12″ inch pan was very heavy, but I wanted something big enough to do a lot of cooking in, so I took it home. After seasoning it I tried to make scrambled eggs. Cooking scrambled eggs in it was easy. Lifting the pan to dump the eggs on the plate was not. When I realized how unwieldy a 9lb pan is, I decided it wasn’t the pan for everyday use.

That sent me back to the internet to find a good lightweight cast iron pan.

Through some comparison research I settled on a 10 inch Lodge skillet. Weighing in at about 4.5 lbs it is considerably easier to manipulate than the 9 pound, 12 inch behemoth. It’s the right size for all of the day to day cooking that I do, like making scrambled eggs, frying up salmon, vegetables, etc.

One thing that I hadn’t realized when I first starting looking at cast iron pans is that different brands make different lengths of handles. The first skillet I bought (the 12 inch one) has a very long rectangular handle, while the Lodge has a shorter, roundish handle.

Since cast iron tends to distribute heat all through the pan (including the handle), longer handles have the advantage of keeping your hand further away from hottest part. This means you can manipulate the pan on the stove without necessarily needing to use some sort of handle cover.

I’ve read though that longer handles have a higher chance of snapping off than the shorter handles, and that’s why cast iron generally has shorter handles. With as heavy as these pains are I can see how that extra length could lead to snapping.

I find that from a comfort point of view, I like using the shorter handle of the Lodge. I don’t use a handle cover, as they tend to slip around too much, but I do use a standard cloth pot holder to grab the handle. That keeps me from burning my hand, and gives a little extra grip around the handle to make it easier to move around when I’m ready to plate the food.

How to Season Cast Iron Pans

What does seasoning a cast iron pan actually do?

Seasoning is the means of infusing your skillet with oil through a process called polymerization so that food doesn’t stick to your pan. It also helps prevent your pan from rusting. Some say that it can enhance the flavor of your food as well.

Seasoning cast iron pans is actually really simple to do. When you first get your skillet just follow these steps:

Some people say not to use paper towels because they will tend to leave little lint particles. I didn’t have that problem.

Other people suggest a variety of oils to use in place of olive oil, like the following:

I happen to have lots of olive oil at home and it helped to season the pan just fine.

After the initial seasoning it’s a good idea to rub a little oil into your pan after using it from time to time. I rub just a dab of oil into it, heat it up on the stove top for a few minutes and let it cool down. This helps “re-season” your skillet.

A trick I picked up to add some additional seasoning (and flavoring) to your pan is to cut up a pound of bacon into bite sized pieces, and cook it in the skillet. The bacon fat will add another layer of delicious seasoning to your pan.

One thing you want to be careful of with any cast iron pan is you don’t want to lose the seasoning. This can happen if you wash your pan incorrectly.

The correct way to clean a cast iron pan is to run it under warm water while the pan is still warm (never run it under cold water when the pan is warm, I’m told that could make it crack). This will cause some steam to generate. Take a rough surface sponge and scrub the pan with only the sponge and water. Do not use any soap as that will remove the seasoning.

If the pan is properly seasoned to begin with then food shouldn’t stick to it and it won’t require any excessive scrubbing.

The biggest reason (and literally the only reason) I was interested in trying a cast iron skillet instead of my regular non-stick pans is that I’ve heard that it makes food taste better.

I’ve also been told by other people that think it doesn’t impact the flavor of the food at all.

So what have I found? Well, to me (and my wife) cooking in cast iron has had a major impact in the flavor of the food that we cook. I make a breakfast burrito every morning by frying up some scrambled eggs and eating them in a tortilla shell. I can say without doubt that the scrambled eggs taste immensely more flavorful in the cast iron skillet than they do in a non-stick pain.

Here’s how I cook the scrambled eggs. I put the skillet on the stove top, over a medium-low heat. I put a little bit of olive oil in the pan and while it’s heating up I prepare the scrambled eggs, seasoning with a bit of salt and pepper. Once the pan is heated up I put about a tablespoon of butter in the pan until it melts, then pour the eggs in. I stir the eggs occasionally until they’re done, then drop them into the tortilla shell.

The eggs come sliding out of the pan with ease. They did stick a little bit when I first got the pan but now that’s it’s been seasoned, cooked in, and re-seasoned with bacon grease the eggs never stick to the pan. And they taste incredible.

Are cast iron pans healthier for you than cooking in a non-stick pan? I don’t know. There seems to be a lot of contradictory articles out there, some espousing the merits of “iron mineral transfer” (which is a fancy of saying that iron transfers from the iron in the skillet to your food), and other people claim that’s hogwash. I haven’t seen anything saying that cooking in cast iron is bad for you, so I’ll just continue to enjoy the taste benefits.

So, What’s the Verdict?

Are cast iron skillets worth the effort? Do they make food taste better? Are they easier to clean than regular skillets?

The answer for me is a definite “yes”. We cook all kinds of food in our skillet daily, and it seems to get easier to clean, more non-stick and more flavorful as time goes on. Cast iron skillets are cheap, and worth trying for yourself.